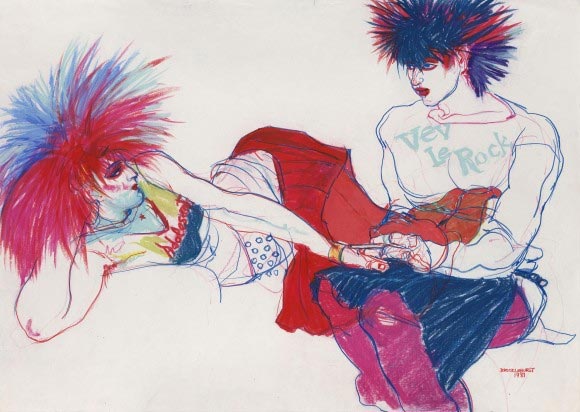 Drawing live in fetish clubs, punk squats and on the performance scene of 1970-90s London, Berlin and New York, Jo Brocklehurst’s artwork is a unique record of subculture.

Her figurative paintings from fetish clubs document experiments with sex, androgyny and couture that later inspired the mainstream fashion collections of Jean Paul Gaultier, while her best-known portraits from the 1980s offer a raw, beautiful and female perspective on punk.

Co-curated by her model and muse Isabelle Bricknall, the exhibition also features her drawings of Berlin’s 1990s performing arts scene for the Berliner Zeitung newspaper, alongside clubland-inspired interpretations of Alice Through the Looking Glass.

“This is transgression at its most stylish.”
The Telegraph (Critical List 28/01/17)

“Brocklehurst’s work is a vital, insider’s chronicle of outsider movements that were considered subversive, and yet would become hugely influential.”
Metro